The film Hacksaw Ridge will be released on 27 January 2017 in the UK and features the story of Private First Class Desmond Doss, a Seventh-day Adventist medic serving during the Second World War.  Although the film itself does not shy away from portraying the horrors of war, by all accounts it is a fairly accurate account of Desmond Doss's early years and wartime experiences.  His views on not breaking the 10 commandments meant that when he enlisted to serve in the US military, he opted to do so as a medic and refused to bear arms.  This decision caused his superiors as well as the members of his regiment to mock him and relentlessly abuse him for his beliefs.  However he held true to his convictions, and while serving in Japan, he performed a daring rescue mission lasting several hours to save the very soldiers who had been bullying him.

Part of the rescue was having to lower servicemen from an escarpment, using the bowline knot learnt from his time in Pathfinders. Each time he saved one person, he cried out to God: 'help me get one more'!  The numbers of people Doss saved that day is not fully known, but estimates put it at between 50-100, so a general number of 75 people is usually quoted.

For a soft-spoken, slight-framed, modest and humble man, this was a magnificent feat and one which earned him the highest US civilian honour, the congressional medal of honour. 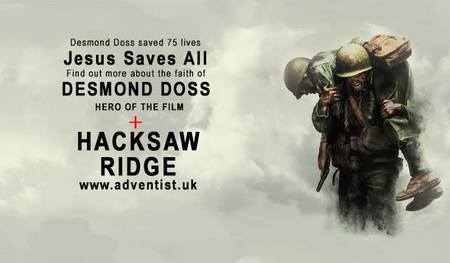 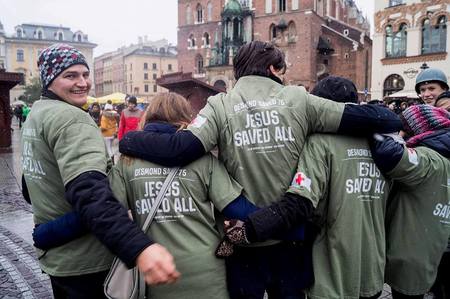 When the film is released, it will provide an excellent opportunity to share Seventh-day Adventist beliefs with your peers.  And even if you prefer not to visit the cinema to see the film, many of your friends will have watched it, and you can still share some thoughts about the character of Jesus that inspired this gentle man to do what he did in the face of persecution and danger. Wounded during the war and later developing tuberculosis which cost him a lung and some of his ribs, he was unable to work full-time and so worked tirelessly for his local church.

Find out what the youth in Poland and Hungary were doing to share their faith when the film was released in the autumn of 2016.

If you would like some ideas about sharing your faith at the release of this film, please contact your local conference or mission youth director for guidance and assistance.

Contacts
If you have been a victim of bullying and would like to talk to someone, Cornerstone Counselling Service is available to listen.
For Religious Liberty enquiries or information, please use the Contact Us feature.
For press information, please contact Pastor Richard Daly, BUC Communication director.