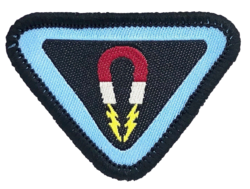 2.     Read the Greek story/legend of how the first magnet was found and named.

5.     Complete three magnet experiments, such as those listed below:

a.     Magnet treasure hunt: Place objects around the room that will and will not magnetize. See how many different objects they can pick up with their magnet. Suggestions: nuts, bolts, tin foil, safety pins, etc.

b.     Mineral rocks with iron: Lay various mineral rocks on a table and see if children can select the ones with iron in them and then try to pick them up with their magnet. (See resource #2)

c.     Move an object with a magnet: Have a friend hold a sheet of paper between his/her two hands, place paper clip on top of the paper and a magnet below. Move the paper clip from one end to the other and back again with your hand. Repeat this experiment by having your friend hold a plastic ruler, mirror, cardboard, etc. instead of paper. Did it work?

d.     Create a magnet: Stroke a steel nail against the magnet 25-30 times. Stroke it in only one direction.

i.    How many paper clips can you pick up at one time?

ii.    Is the nail as strong as your magnet?

1.     A magnet is made of magnetite, a natural magnetic material that will create a magnetic field. A magnetic field is the force surrounding a magnet that draws objects to the magnet. You can feel this force when using a magnet.

2.     Many years ago there was a shepherd named Magnes. Each day he kept watch over his flocks. One cold, blustery day, one of Magnes’ lambs was missing from its mothers’ side. Neither Magnes nor the mother could locate the little lamb. He looked behind rocks, in the thicket, near the stream, behind the bushes, and soon he realized it was really lost. He didn’t believe a wild animal had stolen it or eaten it. He was sure he could find it, if only he looked in all the right places. He stood on a large rock so he could look upon the landscape of the pasture in hopes of finding “whitey”, the lost little lamb. As Magnes stood on a rock, his sandals stuck to the rock where the nails in his sandals were located. He had never noticed that strange power before. Over a period of days and weeks, he brought other metal objects to the “magic rock” and found that iron, regardless of the size, would stick to the “magic rock.” He took some of the stone to his village and many people played with it. It became known as “Magnes’ stone.” Today it bears part of his name in honor of his discovery: “Magnet.” We call his “magic” stone a lodestone, which is made of magnetite, a natural magnetic material.

3.     (A) Permanent: when it is magnetized, it retains a level of magnetism. (B) Temporary: acts like a permanent magnet when it is within a strong magnetic field, but loses its magnetism when the magnetic field disappears. (C) Electromagnet: a special wire that acts like a permanent magnet when electrical current is flowing in the wire. For more detail, see resource #1.


We suggest that if there are any presentation elements of the award you record a video of yourself and include it with your written assessment in your folder.  Your director will check all your work when your club resumes.

Finished all your requirements?  Complete this form online and print off the confirmation for your folders.

For all your Adventurer and Pathfinder supplies, please check your local conference and union shop.  For unique BUC badges, supplies and much more, order from www.pfclub.co.uk.
We are not shipping at the moment, but you are able to place your orders online.

We use cookies to personalize content and ads, to provide social media features, and to analyze our traffic. We also share information about your use of our site with our social media, advertising, and analytics partners.